Not The Right Stones 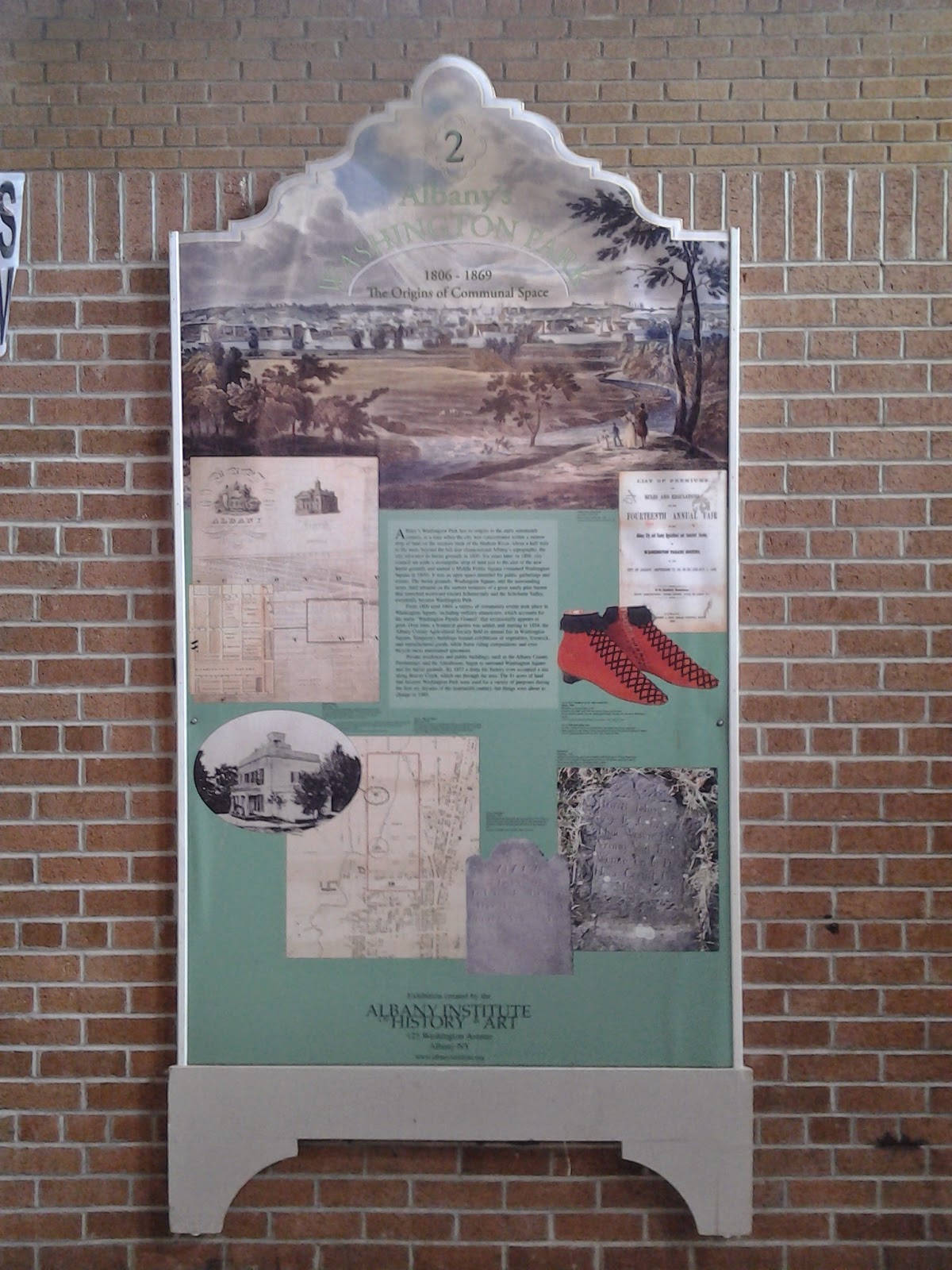 The Lake House is Washington Park has a series of panels which illustrate the Park's history.  They're generally excellent, include a number of vintage photos and maps, and are definitely worth stepping inside to view.

The panel which interests me the most is, not surprisingly, the one which notes the history of the Park's location as a municipal cemetery.  The State Street Burying Grounds served as the not-so-final resting place for thousands of local residents until it closed in 1868 and the remains moved to the Church Grounds section at the Albany Rural Cemetery. 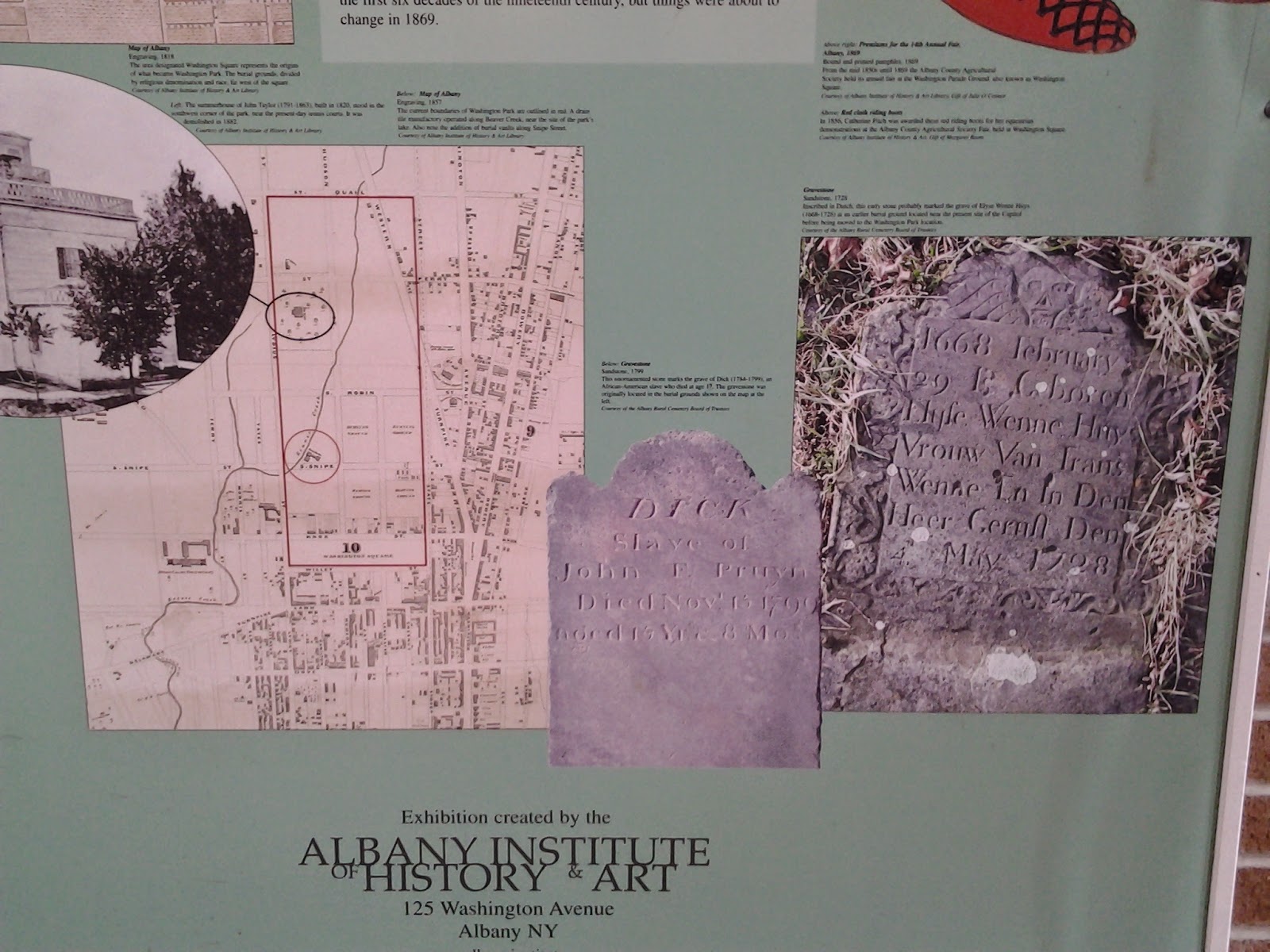 It is very unlikely that either gravestone shown on the panel was ever in the State Street Burying Grounds.

The upper stone shown on the right is one of the most distinctive gravestones in the Church Grounds.  Though it has eroded badly in recent years, it is an incredible example of a colonial headstone carved with a winged skull;  an "momento mori" intended to remind the living of their own eventual death.  The inscription is framed with heavy vines and the lettering is finely carved.  It was carved for the grave of Elyse Gansevoort Winne who died in 1728 and was laid to rest in the graveyard of the Dutch Reformed Church which was then on South Pearl Street near Hudson Avenue. When that graveyard was eventually removed, a number of its oldest stones and remains were placed in a special vault beneath the tower of the Middle Dutch Church which was erected nearby on South Pearl Street.  These same headstones and remains were later placed in a vault beneath the Madison Avenue Reformed Church, as noted in this article by John Walcott.  Those stones and remains  - including Elyse Winne's - were eventually placed in the Church Grounds at the Albany Rural Cemetery, but did not spend time in the State Street Burying Grounds and was therefore not included in the Common Council inventory of the Burying Grounds. 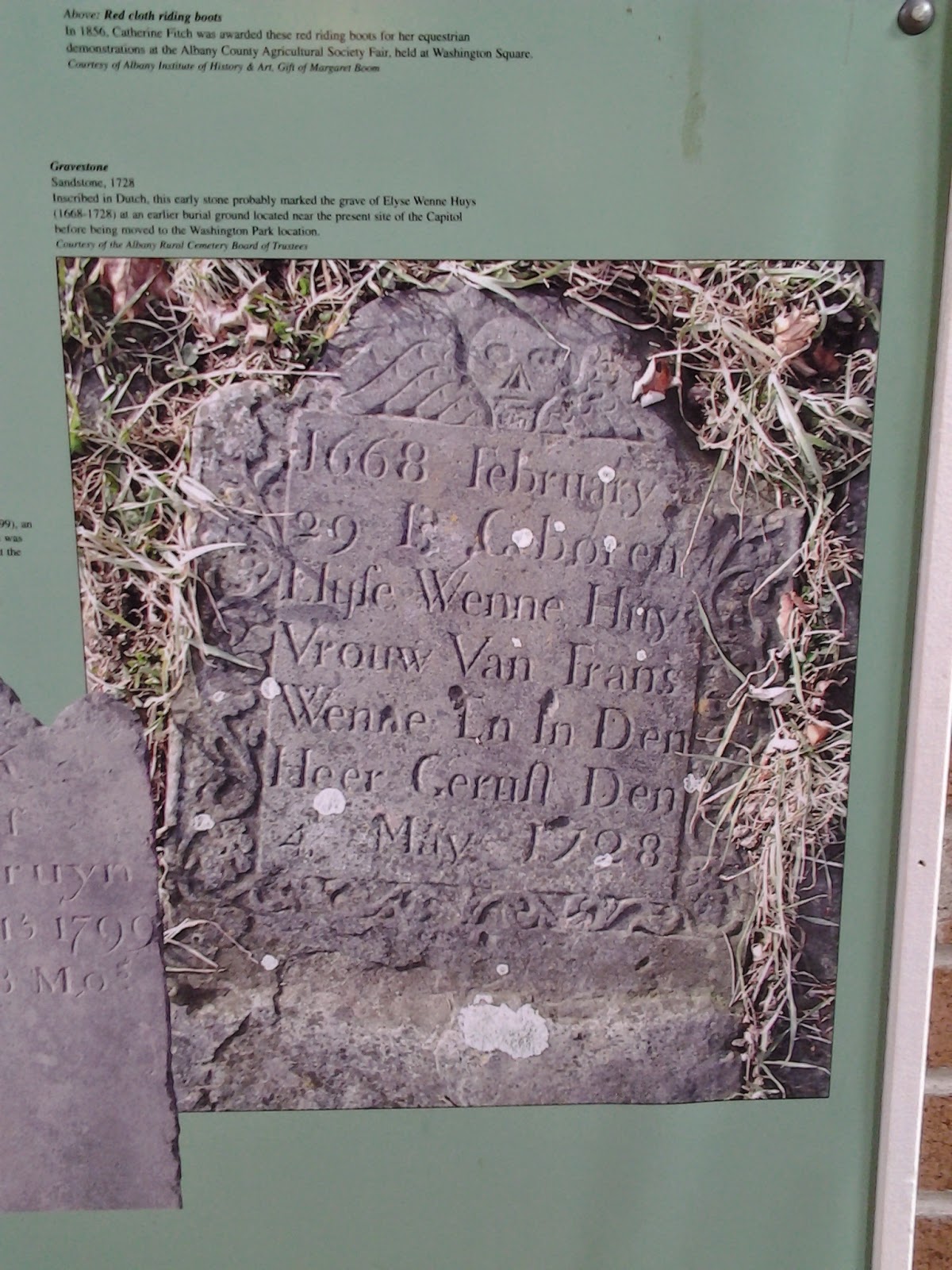 The lower stone depicted is a plain brown sandstone marker from the grave of Dick who is identified in the inscription as a slave of John F. Pruyn who died in 1799.  This stone now rests in the African Methodist Episcopal section of the Church Grounds.  Dick may or may not have been originally buried in the State Street Burying Grounds.  He does not appear in the massive list of graves inventoried by the Albany Common Council prior to the removal to the Rural Cemetery.  However, that list is not complete.  There are quite a few graves now in the Church Grounds that were not printed in the inventory, perhaps omitted by mistake as the stones were transcribed.  He may have originally been buried in the previous municipal cemetery which stood just off Eagle Street south of the State Capitol.  This cemetery received burials from around 1789 to 1799, the same year Dick died.  He may have been buried in one of the small graveyards identified on period maps as "Negro Burying Grounds". 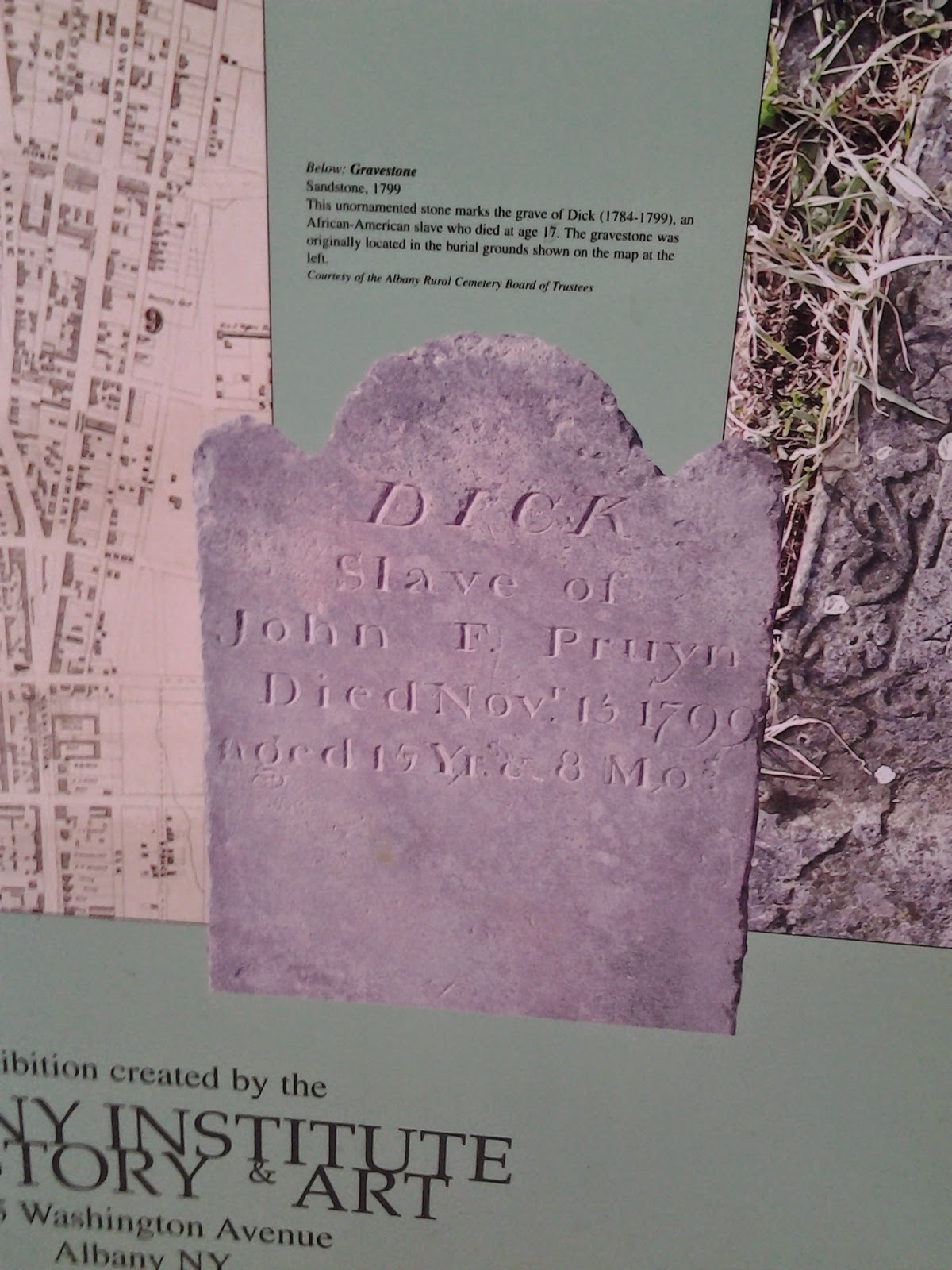 Or it's very possible the young man was buried in the same graveyard as Elyse Winne.  Dick's master was a member of the Dutch Reformed Church and may have arranged for Dick to be interred in a family plot in the congregation's churchyard.  This would account for why Dick's name also does not appear on Common Council inventory.  Like Elyse Winne, Dick and his gravestone would have lain in the vault beneath the Madison Avenue Reformed Church before being eventually brought to the Rural Cemetery.

In that case, neither stone is representative of the graves cleared from the State Street Burying Grounds.  Also, the caption identifies the skull stone as belonging to Elyse Wenne Huys.  The word "huys" is not part of her surname, but part of the old phrase "huys vrouw" or "housewife."

See also:  Jeremiah Field and The Headstone That Was Not Lost, The Oldest Stones (includes a larger photo of the Elyse Winne stone),and Dick.
Posted by Paula Lemire at 8:29 PM