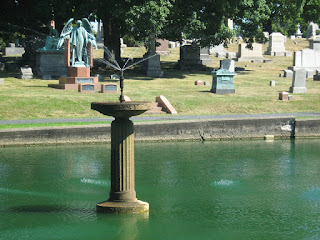 “At the west, a short distance below, is a pear-shaped bit of silver, known as Cypress Water, in which is  a miniature island.”

One of the most recognizable features of the Cemetery landscape, Cypress Pond (or Cypress Waters, as it was more commonly known in the past) turns 148 years old this year.  Among the monuments that overlook this pretty "bit of silver" are the bronze statue of "Contemplation" by Charles Calverley atop the grave of Dr. Jephta Bouleware, the pensive maiden marking the family plot of author Charles Fort, and one of the most photographed statues at Albany Rural - the John G. Myers angel.  Seven of the Cemetery's many roads and paths converge here.

The centerpiece of the South Ridge, if not the entire Rural Cemetery, Cypress Pond was created from a swampy patch of land dotted with natural springs.  A large stone slab covering the outlet at the north end of the pond bears the date of its creation, 1869.  The work was undertaken during the tenure of Superintendent J.P. Thomas who was known for numerous changes and improvements to the Cemetery, including the extension of the grounds to the South Gate.  While a small pond does appear on Cemetery maps from the late 1850s, this area of the Cemetery was, for the most part, a swampy area dotted with natural springs.

And what's in a name? The cypress is a tree long associated with cemeteries and can be found growing in many burying grounds. It has been a symbol of mourning since ancient times because, if cut back too much, the tree will not regrow. Its branches were gifted to grieving families in Athens and it was burned to clear the harsh odors of cremations. The trees have also been planted in great numbers in Turkish cemeteries for centuries

Early photos of Cypress Waters show the little island which formerly occupied the middle of the pond.  Some of the earliest views even show a little canoe near the island.  The wooded island was later replaced with a classically-styled fountain installed in 1950.

Unfortunately, Cypress Pond is now in urgent need of repair.  The fountain which replaced the little island has not functioned in several years.  Several sinkholes near the newly repaired shelter at the northeast corner of the pond required work.  The pond walls are unstable and tilting inward towards the water.

Work is being done in phases and, to date, the Cemetery has financed $21,115 towards these much needed repairs.  The final two phases of the project - replacement and reactivation of the fountain and the stabilization of the pond walls will require additional funds.

The fountain runs on water pressure from a gravity-fed reservoir.  It will be converted to an electrical source with a new floating aerating fountain similar to those seen in Washington Park, Buckingham Pond, and The Crossings in Colonie.  The work will included electricity and working water outlets in the areas around the pond.  The engineering work and design are completed and the project is now awaiting funding.

The buckling pond walls are hazardous, especially since the area immediately around the pond is a popular place for visitors to park and walk.

A more detailed illustrated report on the work to be done and funds needed can be downloaded here:  Cypress Pond Restoration Report PDF

If you would like to make a donation of any size to help complete the badly-needed repairs to the fountain and pond walls, please make a check or money order out to:

Please include a memo that the donation is for "Restoration of The Cypress Pond Area."  Or contact the Cemetery directly at  518-463-7017 or albanyruralcemetery@biznycap.rr.com with any questions or to discuss other donation options.  You can also stop by the office during business hours.  Donations are tax-deductible.

And, please, share and spread the word.  This post (with additional historic images of the pond) will also be available on Facebook at Albany Rural Cemetery - Beyond Graves (it will be pinned to make it easy to find) and on Twitter.
Posted by Paula Lemire at 8:06 AM