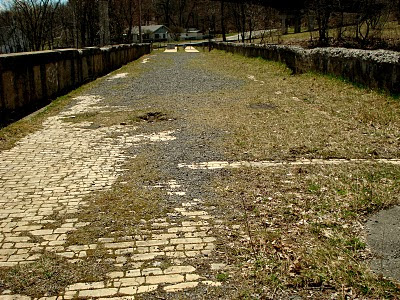 A conversation with a friend on Facebook this morning about Edgar Allan Poe brought back some memories of a local legend that involves the author of "The Raven" and "The Cask of Amontillado."

When I was very young, a family friend told me that the "real" yellow brick road could be found right here in the Albany area. The conversation took place one night as we drove across the bridge over the Normanskill Creek between Albany and Delmar.

Now, I didn't believe for a minute that following said road would really lead me through a land of Munchkins, singing Scarecrows, sleep-inducing poppies, and witches good and bad to a Wizard in an Emerald City, but I was rather eager to see this fabled road. Unfortunately, for some reason, I never had another chance to talk to the family friend about the exact location. I asked others about it, but they seemed to think that I'd imagined the conversation or, worse, that I was a silly child looking for something that didn't exist!

I knew, however, that I had not misheard...that there was a real yellow brick road somewhere in the Albany area. Rather than argue, though, I let the matter go.

Until years later, when I looked down from the Normanskill Bridge and saw a smaller, much older bridge crossing the creek. It was closed to vehicles and roughly paved here and there with asphalt. But, peeking out from under the patchy asphalt, there was a yellow brick road.

The bridge was part of an old road, the Delaware Turnpike, connecting the city of Albany with smaller towns to the south along what is now Delaware Avenue. Not far from this crumbling bridge is another very historic bridge, the 1867 Whipple Truss Bridge. The Whipple bridge, which originally also crossed the Normanskill, was relocated to cross a nearby ravine when the Delaware Turnpike was rerouted in 1899.

And here's how the old Turnpike with its pale gold bricks connects to Edgar Allan Poe...a local legend links Poe and famous road that Dorothy followed to the Emerald City. It's said that Poe visited the creekside hamlet of Normansville...or at least passed through it and mentioned a "yellow brick road" in some obscure letter. L. Frank Baum somehow read this account years later and Poe's reference to the distinctively-colored Delaware Turnpike inspired his "yellow brick road" to Oz.

The provenance of the tale is sketchy enough and probably impossible to ever verify. But parts of it are plausible. Poe certainly would have traveled through this area en route to Sarotoga Springs. His 1842 trip there is a matter of historical record. And, perhaps, he did make mention of the road that took him through the Albany area in a letter now lost. Whether or not Baum ever had knowledge of such a letter is anyone's guess.

Even the history of this brick road isn't completely clear. The present paving of yellow bricks was laid in 1900 well after Poe's death and the old bridge only dates to 1913. The choice of color might have even been inspired by the popularity of Baum's novel...but perhaps the previous bricks were yellow, too?

Whether or not the connection between The Wizard of Oz, Edgar Allan Poe, and the old Delaware Turnpike is just a myth, the yellow brick road is worth a look. While it doesn't lead to any Emerald Cities...it is part of a lovely walking trail.

http://www.bethlehemfirst.com/yellowbrickroad/default.htm
Posted by Paula Lemire at 11:25 AM