Or did Burr shoot Aaron? 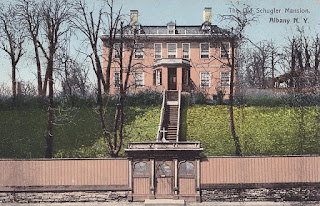 A rather amusing piece from Times Union on August 4, 1936.

Leaving gun and camera at home, the touring reporter stalked through historic old Albany yesterday, armed with pencil and paper to bag a compiled report on how much Albanians actually know about their city.

Casual pedestrians approached in Capitol park, at Schuyler mansion and in the Institute of History and Art, gave unexpected humorous and fatuous answers. One onyx-eyed girl, asked who General Schuyler was, took Oxford glasses from her nose, raised a negligible eyebrow and said, “I'm sorry, I'm busy tonight.” Another surprising answer came from an apple-cheeked youth, who was sure that “Aaron shot Burr on this corner, or did Burr shoot Aaron. Or was it Hamilton? Gee, I don't know.”

The questions and answers:

Why is Schuyler Mansion famous?

“It's fully of old furniture.”
“I've never been inside, myself.”
“I don't know.”
“An Indian chased General Schuyler up the steps and threw a hatchet at him”
“It's a place at the south end of town.”
“I was born and raised in Albany but I've never been through it.”

(Schuyler Mansion, Clinton and Catherine streets. Home of the famous Revolutionary general, preserved and maintained by the state. Exquisite colonial furnishings. Open to the public daily.)

What is that little white monument in Lafayette Park?

(J. Bryan Tombstone. Lafayette park. John Bryan was a member of the first board of directors of the Mechanics and Farmers Bank, incorporated March 4, 1811.)*

Why is the corner of Pearl and State streets famous?

“I couldn't say.”
“I think Fort Orange was built there.”
“I don't know.”
“I didn't know it was famous.”
“Famous? Don't be sill.”
“Erastus Corning used to live here. Yep. Had a barn right sprang where the savings bank is now. I kin remember when --”

(Lydius Corner. Pearl and State streets. Upon this site stood the first brick building said to have been erected in North America of building material imported from Holland for the Rev. Gideon Schaets' parsonage 1657)

What does this statue represent?

“Some angels, I guess.”
“It's Moses and his magic rod.”
“Somebody in the Bible.”
“Whatzisname. He strike the rock and the water come, you know what I mean?”
“It's Moses and the Israelites.”
“I don't know.”

(Statue of Moses. In Washington Park. A superb architectural example of “Moses at Hebron's Rock.” Erected by Henry L. King in memory of his father, Rufus H. King.)

What's inside the Historical and Art Institute?

“There's a lot of mummies in there.”
“I really couldn't say.”
“They have a lot of Indian relics and pewter in there.”
“It's been so long since I've been in there I can't remember.”
“It's interesting if you like that stuff.”
“A general in the Revolution.”
“I don't know.”

Who was General Schuyler?

(Philip Schuyler Statue. Facing City Hall. Major General Schuyler (1733-1804) was the third major general commissioned by Congress. A delegate to the Continental Congress. Said Daniel Webster of him: “He was second only to Washington in the services he performed for his country.”)

Robert Burns Statue in Washington Park:
What statue is that?

(Robert Burns Statue. In Washington Park. Unveiled September 30, 1888, but not completed until the insertion in the pedestal of four tablets depicting the four moods of the poet's works, in 1891. Erected by Mary McPherson)

What does the plaque in the floor of the Capitol commemorate?

“Some famous man rested there after he was dead.”
“I don't know.”
“I must have walked over that thing a million times but I never noticed it.”
“Can't read it without my glasses.”
“Sure, that's where Grant's body rested on its way to the cemetery at Arlington.”
“I don't know, I'm sure.”

(Ulysses S. Grant Plaque. State Capitol. “Here during the night of August 4, 1885, rested the body on the way to its last resting place.”)

Why is the corner of Green and Beaver streets famous?

“Famous? I didn't know it was?”
“I think Aaron shot Burr around here, or was it Burr shot Aaron?”
“I'm very busy this morning, young man.”
“Used to be an old tavern here.”
“George Washington spent the night here.”
“I haven't any idea.”

(Site of Hugh Denniston's Tavern. Green and Beaver streets. Site of the first stone house in Albany, where George Washington was presented with the freedom of the city in 1782 and 1783. It was removed during the year of the first cholera, 1832.)

For what is Saratoga famous?

(Saratoga. The battlefield 36 miles north of Albany, where the tide of independence was turned, bringing France, Spain and Holland to the aid of the colonists.)

*The "Tourist" is actually mistaken about the Bryan stone.  It did not mark a grave and was, in fact, a property marker.
Posted by Paula Lemire at 8:20 PM