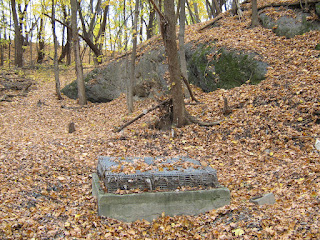 
Van Kriekenbeek, six of his men, and an unknown number of Mahicans had traveled only a mile or so from Fort Orange when they were ambushed by Mohawks along the Beaverkill, a creek now buried beneath Lincoln Park.  The attack occurred near a cascade later called Buttermilk Falls after the frothiness of the water.  Van Kriekenbeek was killed along with three of his men.

The contemporary stories of the event do not specify how many Mahicans were killed, nor the number of Mohawk casualties, but simply say that many men died that day after being met with "a barrage of arrows" and at least two were then burned. The accounts also mention that one of the Portuguese men was wounded while swimming to safety, probably in the rocky pool at the base of the falls (later used as a mill pond).

One man who is mentioned by name in the first account of the event - probably due to the nature of his death - was one Tymen Bouwenz.  He was reported to have been burned alive and eaten by the Mohawks who carried home some of his limbs as proof of their victor.  He was said to have been singled out for this treatment on account of his bravery in the fight.

Van Kriekenbeek and two of his companions were buried close to where they fell and the survivors returned to Fort Orange.

Fearing that the failed raid on the Mohawks might result in an assault on Fort Orange, most of the families living there were quickly evacuated to Manhattan.  Van Kriekenbeek's successor, Peter Barentsen, immediately went to the Mohawks in the hope of restoring relations.  The Mohawks explained that they had no prior grievance with the Dutch and that Van Kriekenbeek's participation in the planned Mahican raid was unprovoked.  Barentsen accepted the Mohawk's justification for the ambush (along with gifts of beaver skins) and, with good relations restored, the families who had fled to Manhattan returned to Fort Orange.

Today, there is nothing to hint at the bloody 1626 ambush in modern-day Lincoln Park.  The Beaverkill was buried in the 19th-century and forms part of the Albany sewer system.  In the park's northwest corner, a neglected, wooded ravine with rocky walls was once the creek's course and the torrent rushing beneath a deep, grated culvert in this gully is the last surviving trace of the waterfall. 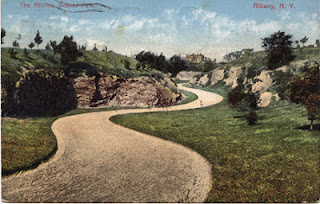 Above:  Antique postcard of Lincoln Park showing the ravine after the stream was moved underground.  At the time, the area was called Beaver Park.

More on the Beaverkill ravine at Albany Daily Photo.
Posted by Paula Lemire at 4:23 PM