A Handful of Hauntings 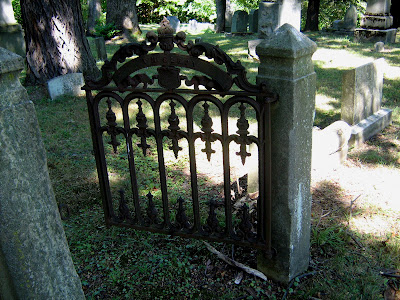 Let me begin by saying that I certainly believe it ghosts. Not just because I've always enjoyed reading good ghost stories, but because I've had enough ghostly experiences of my own.

And one thing that I've often found frustrating is the lack of good historic ghost stories in Albany. Not that there aren't some (and I'll mention a few below). But so many of the spooky tales I hear every year are the same old stories told in cities across the country.

The pretty young hitch-hiker who asks to be dropped off at a cemetery and turns out to be long deceased is a good example. I've heard that story quite a few times and it seems every town has its own version. Here, it usually involves a girl picked up at night on Lark Street and dropped off by Graceland Cemetery on Delaware Avenue. And then there's the abandoned Forest Park Cemetery just across the Hudson River. Do I believe it's haunted? Absolutely! But I also don't believe 99% of the ghastly tales told about it. Again, most read like variations on the same old stories told about old cemeteries.

But, given Albany's size and history (it is one of the country's oldest cities and oldest continuously settled regions), it just seems as if there should be more tales of historic hauntings than oft-repeated urban legends.

Some might it's because so much of Albany's past has vanished as old historic buildings are replaced with newer structures. But, as two of the stories below show, ghosts can linger at a site long after new buildings take the place of those they knew in life.

Still, there are some ghost stories here worth telling. Some are well-known, some are hardly mentioned.

The House On Ten Broeck Street - Among the many handsome old houses on Arbor Hill's Ten Broeck Avenue, there is one tall brownstone that is the site of a very unusual haunting. The ghost that walks it uppermost floors seems to have no connection to the building itself. The house, with a door flanked by white columns, was built in 1859 by a gentleman named George Dawson. In the mid-20th century, though, children who lived in the house reported seeing a strange man whenever they ventured to the top floor. The mysterious and solemn figure, who often appeared in otherwise empty hallways, gave no hints as to his identity or why he haunted this once-elegant house. But he wore the clothing of a 17th-century Dutch soldier, complete with a metal helmet similar to those currently on display in the New York State Museum. Perhaps this man met his end or was buried on the steep hill where the house stands in the 1600s (at the time, the only permanent Dutch settlement nearby was Fort Orange nearly a mile and a half to the south) and continued to haunt the site itself, even after the brownstone was built centuries later.

The New York State Capitol - Probably Albany's best known haunted site, the State Capitol has at least three ghosts within its imposing walls. The first is William Morris Hunt, a Boston artist commissioned to paint murals in the Senate Chamber. The murals' beauty was short-lived, however. There were structural problems with the Chamber's ceiling and, when the ceiling was replaced, the murals were lost within a tiny crawl-space. Hunt was greatly distressed over the loss of this work and disappointed at the lack of further commissions from the State. It's believed this loss contributed to the depression which led him to drown himself in New Hampshire in 1879. There are stories of a disembodied voice in the Senate Chamber which, on at least one occasion, has said "William Hunt is behind the door." Perhaps a reference to the door leading to the crawl-space where his murals have long since deteriorated. The second is a man named Samuel Abboot. A veteran of the Civil War, he was the night-watchman on duty - and the only fatality - when the Capitol was damaged by a massive fire on the night of March 29, 1911. His body was found in badly burned hallway near where the fire had started. Since then, employees and visitors have seen an older man in a watchman's uniform making his rounds in the upper halls, even checking on one young woman working too late one night. The third spectre is that of a distraught man who jumped to his death from one of the majestic sandstone staircases. I've personally experienced all three of these spirits, having heard a slurred male voice say the name "William" in the Senate Chamber, smelled a heavy and very strong odor of smoke and wet ash while standing in the exact spot with Abbott's body was found, and felt a sudden cold current of air inside my coat sleeves near the spot of the suicide.

The Lincoln Park Gully - What could be one of Lincoln Park's most scenic spots, the gully is a dirty and desolate place. Once the site of the Beaver Creek and Buttermilk Falls, its mossy shale cliffs are hidden by dense trees and littered with trash. The ravine's still air is fouled by the smell rising from a grate. Below the grate is a ghost of sorts...the last remnants of the creek and falls rush through an old stone and brick culvert. The stream once provided water-power to mills and breweries, but became so contaminated with waste that it was buried and integrated into the city's sewer system in the 1800s. But this smelly, neglected place is haunted by ghosts of a paranormal nature, too. In the 1620s, a party of Dutch soldiers and Mahican warriors en route to attack the Mohawks were instead ambushed and massacred by the Mohawks at Buttermilk Falls. One of the Dutchmen was burned alive and his leg and arm carried back to the Mohawks as proof of their victory. The others - at least four from the Dutch party and an unknown number of Mahicans - were hastily buried alongside the creek. Even now, in what may be one of the city's oldest hauntings, dark shadowy figures have been seen moving through the ravine in broad daylight and an eerie sense of being watched by something unseen is often reported by those who brave the smell and trash to venture into the gully. I have personally seen two such figures.

The Legs Diamond House - The story of Prohibition-era gangster Legs Diamond is well known in Albany, due in no small part to William Kennedy's novel "Legs." The notorious bootlegger was shot to death in the small upstairs room of a rooming house on Dove Street. Later occupants of the house have reported the sound of late night footsteps and voices on the stairs leading to the room where Diamond was gunned down on December 18, 1931.

President Lincoln in Loudonville - On the night of his assassination, Lincoln was join at Ford's Theatre by a young couple with Albany connections, Henry Rathbone and his fiancee, Clara Harris. Rathbone, who was slashed in the arm by John Wilkes Booth, and Clara, who was the daughter of Senator Ira Harris, were troubled by the Lincoln assassination for the rest of their lives. And Ira Harris' country home - now part of a quiet lane in Loudonville - is said to have been visited by the slain President's ghost many times by Clara Harris and numerous later occupants at guests at the cottage.

SUNY Plaza - Like the Ten Broeck Street brownstone, the stunning structure on Broadway is also haunted by a ghost that seems to predate the structure itself. A woman in clothing which predates the former Delaware & Hudson Railroad Company building by at least a decade has been seen walking its halls. She might have some connection to the hotel which previously stood on this land.

The Old State Education Building - The grim story associated with the massive columned building on Washington Avenue is another one of Albany's better known hauntings. It tells of an Italian laborer who vanished while the building's foundation was being laid. His lunch and other personal effects were found where he'd last put them and it was believed that he'd somehow fallen into the excavations and his fate literally sealed when concrete was poured in over him. Whether or not the foreman realized the missing man would be entombed in the foundations varies, but most stories say he knew and didn't want to delay the work. Since then, employees venturing into certain areas of the basement have told of object being mysteriously moved, of unexplained chills, and a shadowy man just barely glimpsed out of the corner of one's eye. Some discount this haunting as an urban legend, but I grew up hearing the story that there was a body sealed in the foundation from family members. My great-grandfather worked on the construction of the Alfred E. Smith Building across the corner from the Old State Education Building. He heard the story from coworkers, old-timers who had previously worked to build the State Education Building and passed the sad tale of their lost member on to young laborers.

Other haunted sites around Albany include the Russell Sage campus on New Scotland Avenue (some of the older buildings were part of the Albany Orphanage and it's said that at least several children remain as ghosts), several houses that are now part of the College of Saint Rose (including a little girl who died in a fire), the Cherry Hill Mansion in the South End (the ghost story there is well-known and dates back to the infamous 1827 murder), the Schuyler and Ten Broeck Mansions, the Albany Rural Cemetery, the former DeWitt-Clinton Hotel, and the Cathedral of the Immaculate Conception.

But, despite these stories, it just seems like there should be many more....if you know any ghostly tales from Albany's history, please feel free to share!

(Photo: An old iron gate in the Albany Rural Cemetery)
Posted by Paula Lemire at 10:07 AM