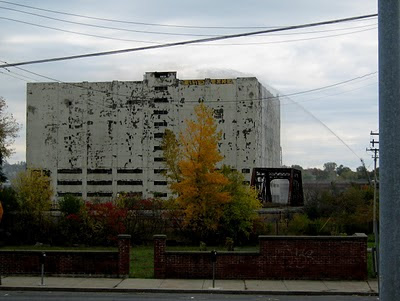 The massive white hulk of the Central Warehouse is both a landmark and an eyesore. A familiar part of Albany's skyline...especially to commuters on 787...the Warehouse caught fire this past Friday and, as of this writing, continues to burn from within. The photo above was taken about twenty-four hours after the fire began and a large house can be see directing water at the upper stories on the south side of the building.

The eleven-story Warehouse was built around 1927 and was, at that time, a state-of-the-art facility for cold and dry storage of meats and other foods.

With its steel and concrete design insulted with cork and cooled with ammonia, it's said it could hold enough food to feed the entire city for three months. En route to the nearby Livingston Avenue Bridge, a spur of railroad actually diverted right into the building to allow goods to be unloaded from trains directly into the Warehouse to be moved to storage areas via large freight elevators. The tracks enter the Warehouse on the western side and reemerge from the second floor on the east side.

It wasn't only meats that passed through this facility. During the height of operations, everything from cranberries for local supermarkets to flour bound for West Africa.

Later, after warehouse operations had all but ceased, its cavernous floors sometimes served as storage for toys donated to area charities at Christmas. For a time, a small store remained open on the ground floor. A cold, white-tiled relic of the building's original use, it sold wholesale packs of chicken and meat, mostly to restaurants.

In the early 1980s, the building made headlines when its then-owner Richard Gerrity has a massive sign painted on one of the exterior walls. The huge logo proclaimed the Year of The Bible to passing motorists...and became the subject of a court case because it violated then-current laws governing billboards and outdoor signage.

In the late 1980s, ninety-eight cases of butter valued (at the time) at $3,000, vanished from the Warehouse where it was being stored after being issued by the U.S. Government to the Albany County Emergency Food Task Force.

The signs of neglect were obvious even from a distance. Graffiti was visible on upper stories. A court had to order bankrupt owners to keep the power on in the building to prevent leakage of ammonia from the cooling pipes and thereby endangering surrounding neighborhoods on either side of the Hudson River. The painted signs on the exterior walls faded to illegible shadows. Plaster rained from the facade on windy days. It was becoming a modern ruin.

It became a property with some potential, but many obstacles. As a cold-storage facility, it was obsolete and unneeded. The cost to renovate the building for any sort of reuse was higher than most investors would be willing to risk...not to mention potential environmental issues associated with the dormant refrigeration systems. The cost of any drastic reuse - such as conversion to an aquarium or art space or even a new train station - was equally high. Demolition of the building had been frequently estimated at at least $1.5 million dollars (roughly the amount the current owners paid for it a few years ago).

As of today, the building is in a smoky limbo. The fire which has burned through the weekend has, so far, not weaken the exterior walls and there is reportedly no threat of a collapse. The steel and concrete were simply built that solid. As the fire spread downward through vast empty spaces and deep elevator shats from its apparent origin on the upper floor to create an inferno in the ground floors, it has undoubtedly gutted much of the interior. Whether or not this derelict, but impressive part of Albany's skyline can or should be saved will remain to be seen.

Photographer Sebastien Barre ventured inside the derelict Warehouse and documented its ghostly interior (as well as the spectacular skyline views from the roof) in a 2009 photoset. On Friday, he returned to document the fire. Kudos to him; between his tweets from the scene and his impressive photos, he did a much better job capturing this story than much of the "official" media.

Also, All Over Albany has an excellent collection of photos and stories about the fire, as well.
Posted by Paula Lemire at 10:48 AM