Independence Day at The Schuyler Mansion

On Monday, July 4, the Schuyler Mansion will hold an Independence Day Celebration from 11:00 A.M. to 4 P.M.

The event will include a balladeer, games, magicians, tinsmiths, ice cream, and other family-themed activities at the Mansion on 32 Catherine Street (South End). 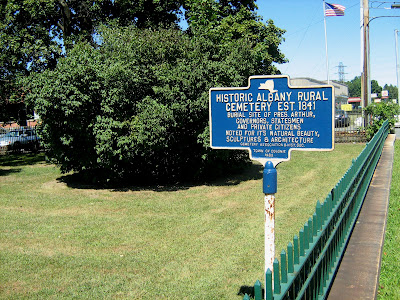 A new companion to this blog and Albany (NY) Daily Photo focusing on the historic Albany Rural Cemetery:

Albany Rural Cemetery - History In Photos
Posted by Paula Lemire at 8:51 AM No comments:

A Lord Interred In Albany - Viscount Howe (Part One) 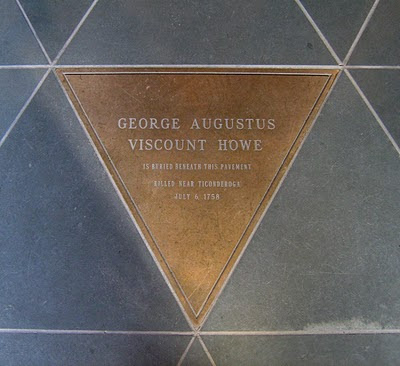 It's not every day that one finds an English Lord buried underfoot in an American city. But walk through the massive bronze doors of St. Peter's Episcopal Church at the corner of State and Lodge Streets and look down. Set in the floor is a bronze marker which reads, GEORGE AUGUSTUS VISCOUNT HOWE IS BURIED BENEATH THIS PAVEMENT KILLED NEAR TICONDEROGA JULY 6, 1758.

A larger plaque of polished black stone hangs on the wall nearby and gives a little more information on the interment: BENEATH THIS PAVEMENT LIES THE BODY OF GEORGE AVGVSTVS VISCOVNT HOWE A DISTINGVISHED MAN AND SOLDER A FRIEND OF THE COLONIES KILLED ON THE MARCH TO TICONDEROGA JVLY 6 1758. This ornate memorial, designed by prominent Albany architect Marcus Reynolds, features Lord Howe's coat-of-arms and is of a similar design to monuments in the Reynolds family plot in the Albany Rural Cemetery.

Described by his contemporary Major-General James Wolfe as "the best officer in the British Army," George Augustus, 3rd Viscount Howe, was born in 1725, either at his family's home on London's Albemarle Street or their estate at Langar, Nottinghamshire. His family was quite well-connected as his mother, was the niece of King George I, and his father served as Governor of Barbados.

George Augustus began his career military career at the age of twenty, serving in the War of the Austrian Succession and would later be described as "the best officer in the British Army" by Major General James Wolfe. He would go on to introduce the Light Infantry into the British Army, training them for rapid movement in the wilderness of the American Colonies. His efforts would help shape the later Continental Army during the Revolutionary War.

In 1758, Brigadier General Howe took part in the disastrous attack by General James Abercrombie on the French-held Fort Ticonderoga. Howe's supporters, including the Prime Minister William Pitt, would have greatly preferred to have Howe himself leading the campaign against Ticonderoga, but Abercrombie's seniority and political connections put him in command.

Marching north from Lake George, Howe's regiment encountered the French in a skirmish close to Ticonderoga on July 6. The British won the skirmish overwhelmingly and with minimal losses compared to the enemy's. But one of those casualties was Howe. Shot at extremely close range, the 33-year old Howe was fatally struck in the heart. His adjutant later wrote, "Never has ball had more devastating effect ... he was hit in the chest, fell backwards and only the tips of his fingers twitched for an instant."

By most historic accounts, Howe's body was transported to Albany by barge under the care of his friend Phillip Schuyler, then a young fellow officer in the British Army.

Reports vary as to where Howe was originally interred; some refer to the Schuyler family vaults, others to either the Dutch Church or St. Peter's Episcopal. Certainly church records for the latter make note of related burial expenses and Howe had been a member of the Church of England. Some accounts say that Howe's body was first laid in the Schuyler vaults until a spot under St. Peter's chancel was prepared to receive his remains. Schuyler himself was a warden of the church.

A Times Union article from 2001 also contains a tantalizing reference to Howe having been buried in secret at one of Albany's forts before being laid to rest beneath the church, a claim said to be backed by the church's records.

A popular officer who was an ease among his peers and among the common people, he was mourned both in England and in the Colonies. A monument in his memory was erected in London's Westminster Abby with the inscription:

THE PROVINCE OF MASSACHUSETS BAY, IN NEW ENGLAND BY AN ORDER OF THE GREAT AND GENERAL COURT BEARING DATE FEBy; 1st: 1759, CAUSED THIS MONUMENT TO BE ERECTED TO THE MEMORY OF GEORGE AUGUSTUS LORD VISCOUNT HOWE, BRIGADIER GENERAL OF HIS MAJESTY’S FORCES IN AMERICA, WHO WAS SLAIN JULY THE 6th 1758, ON THE MARCH TO TICONDEROGA, IN THE 34th YEAR OF HIS AGE: IN TESTIMONY OF THE SENSE THEY HAD OF HIS SERVICES AND MILITARY VIRTUES, AND OF THE AFFECTION THEIR OFFICERS AND SOLDIERS BORE TO HIS COMMAND. HE LIVED RESPECTED AND BELOVED: THE PUBLICK REGRETTED HIS LOSS; TO HIS FAMILY IT IS IRREPARABLE.

The monument is a large marble tablet atop a pair of lion's heads. A mourning female figure in classical robes rests atop the tablet.

About forty years after Howe's death, the original St. Peter's Church was demolished to make way for a new church building designed by noted Albany architect Phillip Hooker. At this time, Howe's coffin was exhumed and reburied in the new church around 1802. It is believed that they were temporarily placed in the Van Rensselaer family's private vault during construction of the new St. Peter's.

At the time of the first exhumation, Elkanah Watson (who was born the same year in which Howe was killed) attempted to obtain a rather morbid, if not downright souvenir of the Viscount and later chronicled the incident:

As the bones were then collected to be thrown into a promiscuous mass, I conceived the idea of getting possession of this skull of a Lord. I ascertained from Henry Cuyler, a British half-pay officer residing then at Greenbush, the precise spot where he was buried, which was also indicated by his coat of arms being placed on the E. wall, nearly over the tomb. I took the opportunity, to avoid exciting curiosity, when the workmen were gone to dinner, and with the aid of my man, we removed all the dirt and rubbish which covered the remains of a double coffin containing his ashes. The outer one made of white pine, had nearly moulded into dust; the inner one being made of mahogany, was with some exceptions sound, but in some places it had rotted. The weight of the earth had forced its way intermingled with his Lordship's bones. I removed the lid and found a thick rich silk damask in which his cold remains were enshrouded on his interment, apparently sound. In attempting to remove it, it crumbled into dust. I then perceived the object of my research within my grasp, resting in peace after slumbering forty-four years (44 years) within this damask. I raised it with great caution with my left hand and to my astonishment I found a fine set of shining teeth; the hair of his head in excellent preservation completely matted with powder and pomatum as if recently done by the frizure. The queue was very neat, the ribbon and double beau apparently new & jet black, but on touching it moldered between my thumb and finger. I concluded with Mr. Cuyler who alone was in the secret to send it to his family in England. On further consultation we thot that it would only open a fresh wound which bled nearly half a century ago and answer no valuable purposes.'

Whether or not he actually made off with the skull of Lord Howe isn't made clear, but the remains of the Viscount were respectably reburied beneath the second St. Peter's...only to be disturbed again.