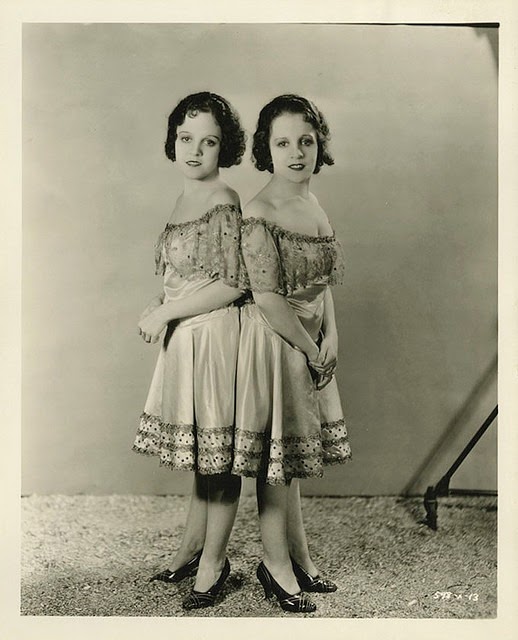 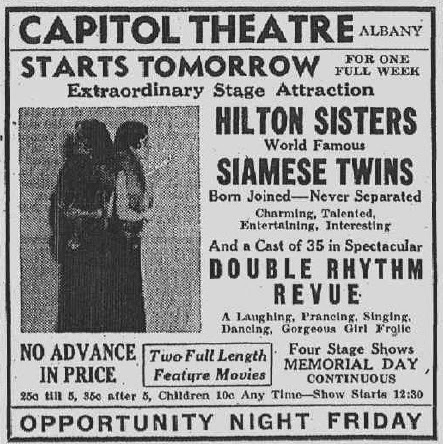 Booked at the Capitol Theater on Chapel Street and staying at the Kenmore Hotel, the Hilton Sisters met with Inez Shook of the Albany Evening News for an interview in the paper's June 1 edition.

Whether it's a question of boyfriends or breakfast, Daisy and Violet Hilton, famous "Siamese twins" appearing at the Capitol just can't seem to get it together.

"We're not like other twins who pretend to have the same tastes and likes; we are individuals, first and last," said Daisy.

"We never agree about our friends, the food we eat, or our clothes.  It's silly for twins to say they always like the same things.  It just isn't natural."
The little blue-eyed girl patted a bit of rouge on her face as she stood before the dresser mirror in her room at the Kenmore.

"Did you notice that my sister uses rouge, while I don't?" Violet asked unexpectedly from the other side.

That's the way they impress one -- as individuals.  When Daisy speaks, you think of her as one person alone, and forget entirely her other sister.  When Violet speaks, Daisy withdraws from your notice.

Both twins have blue eyes, and for stage purposes wear the same style hairdress and clothing.  But one would never mistake one for the other due to a difference in size and features.

They confess to 26 years.  Daisy is engaged and expects to be married -- sometime.

"I don't plan to be married for a year or two," she announced, "but it isn't Violet who is delaying my wedding.  We have to put up with one another's friends; I'm sure we can get used to one another's husband's as well.

"Marriage for a member of the theatrical profession is highly impractical.  There are too many new persons, new amusement, and new places to come between them, and prevent them giving one another the full attention each will demand."

Since Daisy and Violet like different collors, they compromise on their dresses and take turns in choosing the day's outfit.

"That's why we can get along despite our conflicting likes," Daisy declared.  "Neither of us is boss.  When we quarrel one just waits for the other to cool down.  We never argue."

There are a few opinions which the sisters share together.  Both prefer men to women.

We have very few women friends," Daisy declared.  Most girls in the show business are scatterbrained.  They also are a menance to another girl's career.  Or course, there are exceptions."

She introduced one "exception" -- Mrs. Eleanor Lynn, their young companion-secretary.  Mrs. Lynn orders their meals, dresses their hair, and, as Daisy explained, "keeps away anyone we don't want to see."

"We dress ourselves," she went on.  "Ever since we were three years old we've been able to do everything for ourselves."

Born in England, where they have returned on numerous tours during their lifelong careers as "troupers," both girls place the country of their adoption far ahead of that of their birth.

"We loathe English people," Daisy declared with no hesitation.  "You see, I am always frightfully frank; I believe in coming right out with what I think."

"England is a beautiful country -- but lonesome.  A show's headliners over there never associate with the other members of the company.  Here we are all troupers together."

Moving pictures are one of the girl's favorite entertainments.  Both like detective stories and are "passionately fond of jazz music."  Both are able to sing and dance.

"I had an abscessed throat during a Trenton engagement and couldn't make a sound," Violet spoke up.  "Poor daisy had to do all the work.  All I could do was just go along.  That, incidentally, was the first performance I've missed.  We are very healthy.  Only I like to sleep more than Daisy."

An enthusiastic liking for boxing is shared by both dimunitive young women.

"But Violet likes boxers, too, and I can't tolerate them," Daisy observed.  "I think they are the most stupid egotistical persons in the world."

"We like everything that men like," Violet suddenly announced.  "Every sport, that is, except baseball and football.  If I weren't on the stage, I'd like to be a fight manager."

"I'd want to be a detective or a nurse," said Daisy.

The twins manage all their own business affair and bookings for the revue that is now playing in Albany.  Their work occupies a major share of their time.  Accompanying them is their little Yorkshire terrier, Dollie, whom they brought from England.  Dollie is Violet's pet, but both girls show a real fondness for the pint-size dog."

"We both like dogs, but we can't agree about children," Daisy said.  "Violet loves them and wants to have a child.  I detest them.  They make me nervous when they're around.  But I'll never try to boss my sister about that matter any more than we ever have one another about other little things."

Photo of Daisy and Violet Hilton (and Dollie, Violet's Yorkie) which appeared in the Albany Evening News.

While Daisy (who certainly dominated the interview) was engaged at the time of their first Albany performances, marriage never did work out for the Hilton Sisters.  Plans for Daisy's marriage met with disaster as state after state denied her and fiance Jack Lewis' a marriage license on the grounds that marriage to a Siamese twin was bigamy.  It was Violet who ultimately married; but it was purely a spectacle.  She exchanged vows with Jim Moore in front of thousands of witnesses at the Texas Centennial Exposition in 1936.  Jim was a close friend of the sisters and a dancer and emcee with their traveling show, but he was homosexual and apparently not even informed of the wedding until it had already been announced by promoters.  The marriage soon ended in divorce. Daisy, too, married eventually.  Her 1931 marriage to dancer Buddy Sawyer lasted less than a month.

Hollywood stardom also eluded them.  Though they appeared in Tod Browning's controversial 1931 film Freaks, there were  no opportunities in the movies for a pair of women joined at the hip.  They continued on the vaudeville circuit as long as they could.  They made a second movie, the exploitation film Chained For Life which was a lurid tale of vaudeville and murder centered around Siamese twins named Dorothy and Vivian Hamilton.  Their final live appearance was in 1961 at a seedy drive-in theater in Charlotte, North Carolina.  Unaccustomed to life away from the stage, the sisters eventually found work at a supermarket in Charlotte.  On January 4, 1969, the Hilton twins were found dead in their small home.  Daisy had been ill with Hong Kong flu;  it is believed that she passed away first and that Violet survived her by a couple of days.  The Knickerbocker News carried their obituary; the headline noted they were "once entertainers."

In 1997, Side Show, a musical based loosely on Daisy and Violet Hilton opened on Broadway.  Starring Alice Ripley, Emily Skinner, Jeff McCarthy, Norm Lewis, and Hugh Panaro, it had a very short run, but a revised production is now in previews on Broadway and a revival which opened on November 17, 2014.  A documentary on the Hilton Sisters, Bound By Flesh, is currently streaming on Netflix.