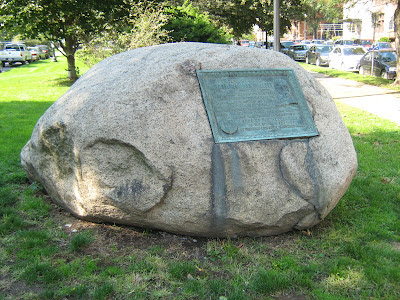 This boulder at the corner of Willett and State Streets honors the namesake of the former, General Marinus Willett.

The plaque features a profile of Willett and the following inscription:

In Grateful Memory of General Marinus Willett
1740 - 1836
For His Gallant and Patriotic Services In
Defense of Albany And The People of
The Mohawk Valley Against Tory And Indian
Foes During The Years of The War For
Independence, This Stone, Brought From The
Scenes of Conflict And Typical of His Rugged Character,
Has Been Placed Here Under The Auspices of The
Sons of The Revolution
In The State of New York
By The Philip Livingston Chapter
A.D. 1907
This memorial was originally located a few yards deeper in the park, but was moved to its present location several years ago as it was struck several times by cars missing a sharp turn.

It's interesting to note that the Willett Street might not have been named for the General in the first place. It was originally Willet Street and probably followed the pattern of naming the north-south streets in this area after birds - Eagle, Swan, Dove, Lark, Willet, and Snipe (the last of these no longer exists). At some point, the extra "t" was added and the association with General Willett began, making it a logical place for his memorial.
Posted by Paula Lemire at 11:29 AM