Bicentennial Plaque No. One - Fort Orange 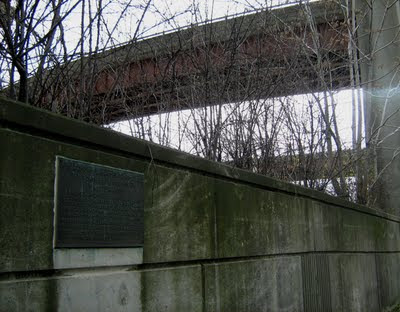 Located on a retaining wall under the tangle of ramps just a few yards north of lower Madison Avenue, this plaque was the first in the series of bronze tablets erected throughout Albany during the City's Bicentennial in 1886.

This plaque was originally mounted on a granite base in the long-gone Steamboat Square near the foot of Madison Avenue (not to be confused with the modern public housing building of the same name located a few blocks south). Moved several times over the years (first in 1930 during the construction of the original Dunn Memorial Bridge and again in the 1970s with the building of I-787), it is virtually lost in a drab concrete wasteland behind the Holiday Inn Express on Broadway.

Despite its unappealing location, this plaque was designated the first in the series with good reason as it commemorates the origins of the Albany and, arguably, its most significant historic site - the first permanent settlement at Fort Orange.

Despite being designated a National Historic Landmark and excavated by archaeologists in the early 1970s), the Fort Orange site is now completely buried beneath the ramps and overpasses of I-787 and the South Mall Expressway.

It is a pity that this marker, the only tangible commemoration of Albany's earliest days, is hardly visible, except as a glimpse from a passing car.

Upon this spot washed by the tide, stood the north east bastion* of FORT ORANGE
Erected in 1623, Here the powerful Iroquois met the deputies of this and other colonies in conference to establish treaties. Here the first courts were held. Here in 1643 under the direction of Dominie Johannes Megapolensis, a learned and estimable minister, the earliest church was erected north west of the fort and to the south of it stood the Dominie's house.

*While the plaque is currently located on the site of Fort, it is no longer located at the exact spot of this bastion.
More on Fort Orange
The Bicentennial Tablets
Posted by Paula Lemire at 10:24 AM