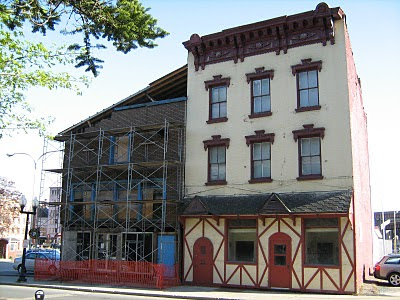 For many years, the Quackenbush House on Broadway at the foot of Clinton Avenue was believed to be the oldest surviving house in the City of Albany. Built between 1730 and 1746 for Colonel Hendrick Quackenbush, it is certainly one of the oldest buildings in New York State.

But a shabby former restaurant supply shop half a mile south on the edge of Albany's oldest park, in fact, predates it by several years.

48 Hudson Avenue is not much to look at now and it's certainly not as handsome as the well-maintained brick Quackenbush House. The windows are boarded over. The walls are covered with grimy siding. A cumbersome brick wing extends from the rear. Gaps in the structure reveal wood beams and protective tarps. The front is obscured with scaffolding. If one gets close enough to peer through the dusty windows, there's a glimpse of a very old wooden beam propped on sawhorses.

But what lies within this dreary exterior is an historic treasure, a discovery all too rare in Albany these days.

Hidden inside these walls is Albany's oldest house. Behind the unattractive store facade are the remains of a Dutch-style anchored gable house with it a steep pitched roof still visible within the later shell. Original clapboards still cling to at least one wall. Inside are remnants of distinctive jambless fireplaces, insulating mud bricks, shards of colonial-era pottery, slots that would've held leaded windows, and a molded anchor beam. All of which make this a time capsule full of local history, a prime example of the type of houses that once lined early Albany's streets.

For many years, it was generally believed the original house on this site was built by Johannes Radliff, a shoemaker, in 1759. But mortgage documents from that year refer to an existing house "formerly Van Ostrande" and, more importantly, recent tests of wood samples taken from the building's ancient beams date the structure to 1728. Historians have concluded that this house was built by Johannes Van Ostrande, a member of Albany's Common Council and probably occupied by him from the late 1720s until he sold it to Radliff.

It would've have probably been one of the first houses built when the young city's stockade expanded south, standing not far from the Ruttenkill creek and the site of the area's first permanent Dutch building, old Fort Orange.

A century after it was built, the Van Ostrande-Radliff House was owned by one Jared Holt who converted the property into a factory producing waxes, mainly for furniture finishing. A brick extension was added to the rear of the old wood frame house. A photo from the end of the 19th-century shows a later owner's name - George T. Stoneman - painted above the second-story windows. Eventually, in the 20th-century, it became Saul Equipment Company and its first floor showroom stacked with commercial-sized pots and heavy restaurant china.

Over the years, though, it was believed that the original building was long gone. Few seemed to realize that the 18th-century house was gradually enclosed by newer walls which preserved it.

The building was purchased several years ago by Brian Parker, a man who had previous experience restoring a similar structure (the 1723 Pieter Winne house in nearby Bethlehem). Parker recognized the potential significance of the closed restaurant supply store and, after buying the almost derelict building, began the slow process of tearing down interior walls to reveal portions of the original house within. It was also Parker who arranged for the wooden beams to be tested, confirming that the Van Ostrande-Radliff House indeed dates to the late 1720s.

Albany's history spans four centuries, but sadly, so few of its earliest historic structures has survived. Colonial and Revolutionary War-era buildings have been almost completely eradicated over the years. Some sites that survived into the 20th-century were destroyed and replaced by modern structures like the Empire State Plaza and Times Union Center. The little house at 48 Hudson Avenue is one of the rare survivors of Albany's past.

The building to the right also has its own history which I've briefly written about here.
Posted by Paula Lemire at 11:18 AM