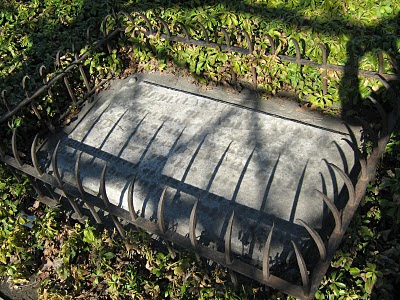 Almost hidden in the greenery in front of University Plaza is a low railing. The iron spikes enclosed a white marble plaque. The marker is very old and barely legible, its antique lettering badly worn with age. Fortunately, a small second marker to its left translates the faded inscription:

The following is the wording that was placed on the memorial stone immediately adjacent to this plaque: The Declaration of Independence was first read in Albany by order of the Committee of Safety July 19, 1776 in front of the City Hall then on this site. This memorial of the event was placed here by the citizens July 4, 1876.

At the time of the Revolutionary War, Albany's first City Hall stood here along Broadway. At the time, this key thoroughfare was call Court Street and ran parallel to the Hudson River just steps away. The City Hall erected in the early 1740s was built to replace Albany's earlier public meeting place on the same site, the 1686 Stadt Huys.

It was at this City Hall that Benjamin Franklin presented the Albany Plan of Union, the first formal proposal to unite the Thirteen American Colonies, to a congress of representatives of the northern colonies and delegates from the Iroquois Confederacy.

In 1776, in the days immediately following its July 4 approval in Philadelphia, copies of the Declaration of Independence were distributed to and read before the public in major cities throughout the rebelling Colonies.

In 1876, a committee was formed in Albany to honor the 100th anniversary of American Independence. The Centennial Memorial Tablet Committee met "to procure the erection of a permanent memorial at the spot where the Declaration of Independence was first publicly read in Albany."

$100 was earmarked for the project and, at the cost of $80, the marble tablet with gilt letters was commissioned and set above the door of the former City Hall.

Before a gathering of "two or three thousand" Albany residents, the plaque, which was covered by an American flag, was unveiled by Visscher Ten Eyck whose grandfather Matthew Visscher has stood before the old City Hall to read the Declaration a century earlier. The plaque was greeted by hearty cheers from the crowd, patriotic songs, chimes from the steeples of nearby churches, and a 100-gun salute.

Today, many historic sites still include a reenactment of the original reading of the Declaration of Independence as part of their Fourth of July celebrations. As the Saratoga National Historic Park, site of the pivotal 1777 battles, a ranger in period costume reads the Declaration, followed by cheers of "Huzzah!" It would be a wonderful tradition if such a short, but meaningful ceremony could be held here in Albany, right beside this historic Memorial Plaque, as a reminder that July 4 is about more than just fireworks and cookouts.

Happy Independence Day!
Posted by Paula Lemire at 10:43 AM