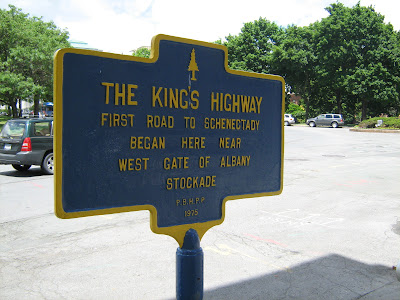 Sign near City Hall at the corner of Eagle Street and Corning Place.

Originating as a simple woodland trail, the King's Highway was the primary road between Albany and Schenectady via the sandy pine barrens.

It was first used as a trading route by the Native Americans bringing furs and other goods to the Dutch at Beverwyck and, by the 166os, had expanded into a wagon path became the main land route between the Hudson and Mohawk Rivers. It was most likely the route taken by a wounded Symon Schermerhorn on the bitterly cold night in 1690 when he rode to warn Albany of the bloody French and Indian attack now called the Schenectady Massacre.

In the mid-1750s, the King's Highway, which was sparsely populated, was considered a haven for thieves and so dangerous that militiamen would escort travelers along it. During the Revolution, it was said to be a hiding place for Loyalists.

By the late 18th-century, though, a stagecoach line was established to carry passengers for three cents a mile with a one-way trip being about sixteen miles. Small taverns, such as Isaac Truax's Halfway House midway between Albany and Schenectady, provided lodgings and meals for travelers. It was said that murders were committed at Truax's and, indeed, excavations on the site in later years did uncover skeletal remains in the cellars. Excavations at other inn sites along the old King's Highway have revealed less ghastly artifacts such as oyster shells and clay pipe stems.

By the early 1800s, travel on the King's Highway declined with the construction of the Western Turnpike (now Route 20) and the Albany-Schenectady Turnpike (now Route 5) and the road through the Pine Barrens was largely abandoned. Today, parts of it can still be traced as part of the trail system in the Pine Bush Preserve.
Posted by Paula Lemire at 3:23 PM