The Reburial of Schuyler Slaves 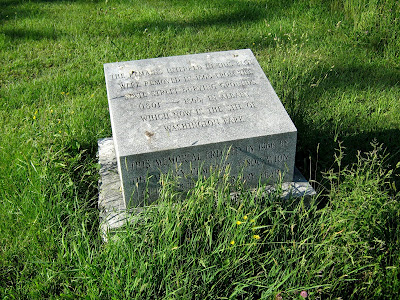 Above: Marker in the historic Church Grounds section of Albany Rural Cemetery
Today's Times Union has a very interesting article on the issues surrounding the reburial of the skeletal remains of slaves discovered close tothe Schuyler Flatts site.

One of the proposed reburial sites mentioned in the article is the subject of my latest blog, the Albany Church Grounds and I will try to follow this story closely.

For those unfamiliar with the Church Grounds, it is a section of Albany Rural Cemetery where graves were relocated from older churchyards and the State Street Burying Grounds (now Washington Park). It contains some of the oldest gravestones in the Cemetery and includes two rows of stones from the African Methodist Episcopal Church. In the past, it has been fairly common for older remains discovered in local construction sites (such as the Alms House burial ground off New Scotland Avenue) to be reburied here.

The Schuyler Flatts site, now a park, is located almost across the road from the Cemetery's main entrance on Broadway in Menands.
Posted by Paula Lemire at 7:39 PM