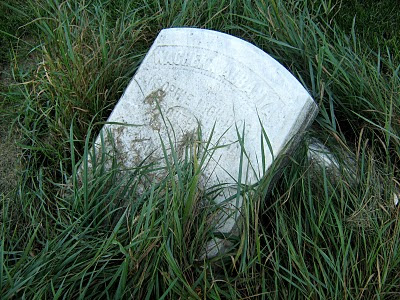 The little girl's grave lies among the elegant monuments of Albany's elite and wealthy. The white marble headstone has toppled and lies propped against its base. The inscription is beginning to weather away and tall grass often half-hides the grave.

The child who was known as Sophie High Dog or Wacheka Albanya was Sioux born in South Dakota around 1890. Too little information is known about her early childhood or family, but she was brought to Albany at the age of five as an orphan. It was later claimed that she had been "thrown away," simply abandoned by her parents.

Wacheka had initially been sent to the Indian Industrial School in Carlisle, Pennsylvania. The Carlisle school's purpose was to assimilate Native American children in white society and its history is one of abuse and tragedy. Wacheka, however, came to the attention of the Albany Indian Association and was termed "too delicate" for a boarding school where hundreds of children died of disease and harsh treatment. The Association, which was founded in 1883 to aid in solving the so-called "Indian problem" through eduction, had the child brought to Albany and placed her in St. Christina's Home. St. Christina's, which operated under the auspices of the Episcopal Diocese of Albany, was located in Saratoga Springs and served as a summer home for the Child's Hospital.

Described as a "bright and earnest" child, she soon became a favorite of caretakers who referred to her in the sentimental language of the era, as a "sweet flower out of rough forest soil" even as they sought to erase all traces of her Sioux heritage with a white Christian education.

Meanwhile, the delicate health that had first won the sympathy of her guardians worsened. Her body was weakened by measles and tuberculosis and she passed away on February 13, 1900. Four days later, William C. Doane, the popular Episcopal Bishop of Albany, presided over her funeral at the Cathedral of All Saints.

Her obituary is a sad one which reflects the prejudices and misconceptions of the day, describing her parents as a "drunken" Sioux father and a "dissolute half-breed" mother. It was accompanied by a picture of Wacheka in fashionable child's coat and bonnet.

She was laid to rest in the Rural Cemetery, her grave paid for by the Albany Indian Association.

The people who arranged for her care, those who paid for her education and, later, mourned her with a lavish funeral acted no doubt believed they did right for Wacheka. They probably meant well and their actions were the product of their era and its cultural values.