The Grim Past of Van Rensselaer Park 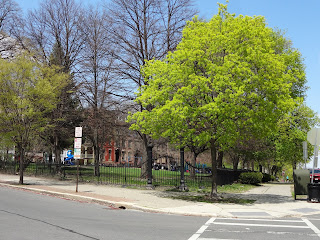 Located between the vacant St. Joseph's Church and the Ten Broeck Mansion (identified on the 1876 map below as the property of Thomas W. Olcott), Van Rensselaer Park is a small and pretty wedge of urban greenspace.

Framed by Ten Broeck Street, Ten Broeck Place, Hall Place, and Second Street, it features a modern playground and an elegant 19th-century iron fence.  Its history, however, goes back to the mid-18th century and the Patroons of Rensselaerwyck.

On October 31 1764, Stephen Van Rensselaer II deeded this parcel of land to the City of Albany specifically for the purpose of a cemetery.  At the time, this area was known as "The Colonie," though by 1808 it was annexed to the city proper.


Known variously over the years as the Colonie Burial Ground, the Arbor Hill Burial Ground, and the Van Rensselaer Burial Ground, the Patroon intended that the lot be used held by the city "on the condition that the same should not be applied to any private purpose or secular use, but should remain as a burial ground or cemetery for all persons in the manor of Rensselaerwyck." 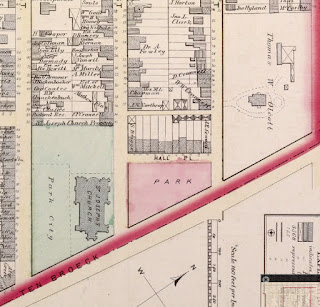 As with the municipal State Street Burying Grounds at the western edge of the city, the little Arbor Hill Burial Ground eventually became an eyesore.  The streets around it were filling up with elegant new houses.  Construction and improvements to the surrounding streets altered the grade of the land around the old cemetery.  Removal of the surrounding soil raised the burial grounds edges to an embankment of some fifteen feet.  Bones and coffins were often exposed as sand was removed. Sometimes the remains tumbled into adjacent lots. The surrounding wooden fence was in ruins.


The well-to-do residents of Ten Broeck Triangle were not pleased to see gloomy old tombstones and exposed remains from their windows and stoops.  Local property owners, including Joseph Hall (the namesake of Hall Place), advocated for its removal.

An 1844 report to the Common Council observed:

"The whole presents a neglected and ruinous aspect, which must be painful to the surviving friends of the dead, who are buried there, and a source of annoyance to a neighborhood daily becoming more populous, notwithstanding the obstacle to its growth which this burying ground presents.....would not be expedient to continue to use this ground for future interments. The public are becoming every day more convinced of the inconveniences and painful associations, as well as the unhealthiness of burying the dead in the midst of the habitations of the living, and it is to be hoped that the practice with us, as it is in very many cities, will be entirely discontinued. Apart from the other considerations, this ground, after all that may be done for its improvement, will still present an appearance of insecurity, which must deter most persons from allowing their friends to be buried in it. We are, however, bound to protect the remains of those who now lie there, and the question presents itself whether it is better to put the ground in as decent condition as possible, or to remove the remains to a proper place where they may remain undisturbed in future."

One expensive proposed remedy was a new fence of varying heights to enclose the forlorn graveyard.  Another proposal called for removing the old remains to a lot at the new Rural Cemetery and erecting a suitable monument over them.


We propose then, in place of maintaining at a heavy expense to the city the present unsightly burying ground on Arbor Hill, that the remains of those buried there should be carefully removed to the new cemetery and then deposited in a vault over which a handsome monument shall be erected – on the monument the names of dead may be inscribed and it will thus stand as a perpetual memorial. Neither the growth of the city or any probable contingency will ever disturb the remains there deposited – survivors will no longer be shocked by seeing the bones of their relatives bleaching in the sun, but will feel a comfort and joy in seeing the place of their repose surrounded as it will be by the most appropriate associations, and their own pathway to the grave may be made more cheerful by the thought that the same resting place may at the appointed time receive their own remains, as well as those of their friends.
In the end, neither plan was adopted.  On October 1, 1849, Stephen Van Rensselaer III deeded the land to the city again.  Now that the city held title to the land without the stipulation that it be used for burials, work began to clear the graves and transform the old boneyard into a small park (just two decades later, the State Street Burying Grounds would similarly be converted to Washington Park)

Relatives of the deceased at were given a chance to remove the bodies of their kin from the Arbor Hill Burial Grounds at their own expense;  a few were indeed transferred to the Rural Cemetery.  The rest would be disposed of by the city.  According to a 1901 column in the Albany Evening Journal:

A large underground vault was placed in the center of the plot and all bodies not claimed were put in the common vault and the spot covered.  The bones, or what remains of them, are now reposing within the confines of the park.

The articles and records make little or no mention of what became of the old headstones.  They might have been stacked inside the vault, recycled for paving and other purposes, or simply discarded. 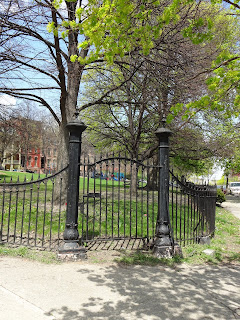