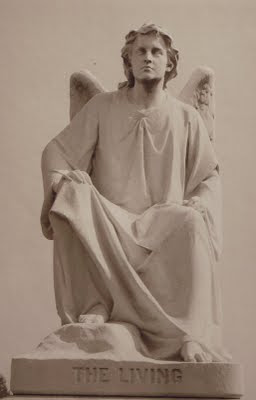 Perhaps the most famous monument in the historic Albany Rural Cemetery – and certainly one of the most written of - is Erastus Dow Palmer's heroic Angel at The Sepulchre.
Commissioned by Robert Lenox Banks, a Treasurer for the New York Central Railroad and, later Secretary to the Board of Directors of the Cemetery, for the grave of his first wife, Emma Rathbone Turner, the Angel sits alone in a circular plot atop a hill near the Cemetery's ornamental pond. A strikingly beautiful monument, it quickly became a draw for lovers of art who ranked the Angel as one of the world's great masterpieces. 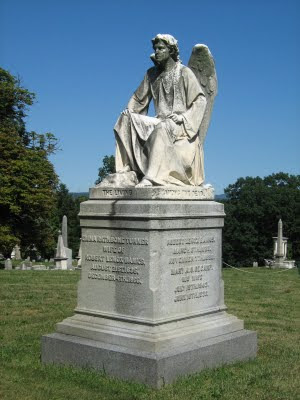 Not that the contemporary praise for Palmer's Angel was unanimous. One critic regarded the both the face and figure as “a very fleshy and unangelic type.” In short, the Angel was too human and even "too American." On the other hand, at least one religious publication praised the Angel enthusiastically as “a royal herald” and the work of “an original and poetic mind.”
As early as 1894, concerns were raised about the damaging effect of the elements on the white marble Angel. The New York Times addressed the issue in an article, “Monuments At Albany.”
Art critics are much concerned over the future of Palmer's masterpiece, “The Angel at the Sepulchre,” which is one of the finest pieces of monumental art in Northern New-York. It is on the burial plot of Gen. Robert Lenox Banks in the Albany Rural Cemetery, and is of large proportions, being 7 feet in height. The figure is deceptive, appearing larger at a distance than when close to it. Chiseled out of one piece of stone, it stands a monument to the sublime creation of a master mind. What the critics fear is that, being of marble and exposed to the severe changes of this climate, scaling of the stone may set in and degeneration certainly take place. Already a part of one of the toes has disappeared, and this fact has caused the lovers of art to renew their entreaties that this work of art be placed under cover and preserved.
Those concerns were well-founded. Today, the elements have softened and worn the Angel's clear features and the white marble is crusted with scaly gray lichen. 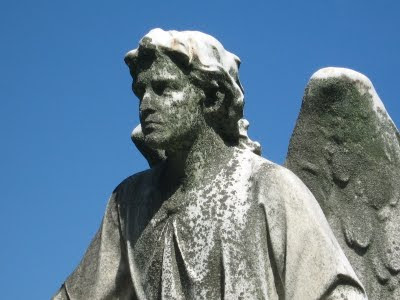 Born in Pompey, New York in 1817, Erastus Palmer was one of America's finest 19th-century artists. Entirely self-taught, he began his artistic career carving small cameo portraits before moving on to marble. His works include The White Captive in the Metropolitan Museum of Art and Robert Livingston in Statuary Hall at the United States Capitol. The Albany Institute of History & Art in his adopted city includes an excellent gallery of his work, including the plaster cast of the Angel. His son, Walter Launt Palmer, was a respected painter best known for his snowy scenes and detailed interiors.
Palmer himself, lies in the Rural Cemetery in a family plot with a Roman-style marble monument just steps downhill from his magnificent Angel. 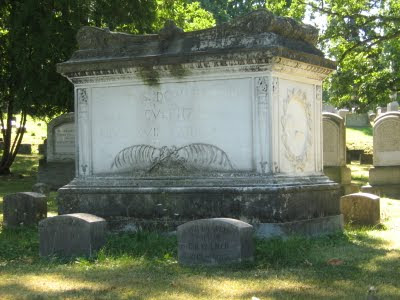 More on the Angel At The Sepulchre
Posted by Paula Lemire at 9:14 AM